Banking while black
This story is amusing in an ‘I can’t believe what I’m reading’ way, but sad; it is a perfect example of the barriers that black people face in society.
https://www.washingtonpost.com/nation/2020/01/23/banking-while-black/

How authoritarianism fails science…
There appears to be no way to force other people to produce their best work (or at least, no-one has yet figured out how). This is an amazing story, much under-reported. After Putin demanded that Russia become a world power in science, Russian researchers were put under a lot of pressure to publish. It backfired badly and the Russian Academy of Sciences has so far retracted at least 869 papers, which is totally unprecedented.
https://www.washingtonpost.com/world/europe/putin-wanted-russian-science-to-top-the-world-then-a-major-academic-scandal-blew-up/2020/01/16/f58239ec-34b9-11ea-898f-eb846b7e9feb_story.html

…and a capitalist analogue
This is an interesting counterpart because it highlights the ways that capitalism also fails science. I think the lesson from both stories is that the best defense against this kind of terribly destructive cheating is well-funded, independent, non-partisan science institutions with open-book policies on everything from data, to analysis, to review, to their own rules and procedures.
https://www.nytimes.com/2020/01/28/us/charles-lieber-harvard.html

Preferences versus facts
This is a wonderful column by Juval Noah Hariri, the author of Sapiens. As usual, his thinking has a kind of crystalline clarity.
https://www.nytimes.com/2020/02/03/opinion/harari-democracy-elections.html

Two stories about water
Water + population growth are the issues of the coming century, at least if we don’t have some sort of nuclear or genetic disaster first.
An excellent article by Thomas Friedman that unfortunately got buried in the impeachment shit-show (to borrow a phrase). He points out that political and ecological misery in the Middle East are inextricably intertwined; current population growth rates are worrying.
https://www.nytimes.com/2020/02/04/opinion/middle-east-climate-change.html

An excellent National Geographic article on the Mekong. The fish of the Mekong are astoundingly diverse and a fish specialist I met in the Lao PDR years ago told me that there are undoubtedly still many undiscovered species. Among other things, the Mekong hosts a 600-lb catfish and a salamander the size of a small dog. So it’s very scary that it is drying up so fast. I suppose I’ve mentioned it before, but it shocks me how good National Geographic is these days – so unlike its old pablum-heavy, almost information-free self.
https://www.nationalgeographic.com/science/2020/01/southeast-asia-most-critical-river-enters-uncharted-waters

Do myelin problems cause autism?
https://www.npr.org/sections/health-shots/2020/02/03/802215344/researchers-link-autism-to-a-system-that-insulates-brain-wiring

Photos of the sun
Very weird new images of the sun. It looks like some sort of viscous liquid boiling (check out the video). Each of those little cells is the size of France. Hot plasma rises in the middle, then cools and sinks back around the edges. These were taken from a telescope on Maui, but there’s also a NASA satellite (the Parker solar probe) that has flown 3 very close passes to the sun already, and will fly ever closer and faster over the next 4 years. It can’t look at the sun; it has to look sideways to avoid melting its instruments.
https://www.theguardian.com/science/2020/jan/29/solar-telescope-captures-most-detailed-pictures-yet-the-sun

An animal friendship
A fantastic 20-second video taken by a game camera of a coyote and a badger crossing a highway together, using a culvert. Apparently it’s not that unusual for those species to hunt together. But this is beautiful -- It’s so clear that the individuals know--and trust--each other. I’m sure that we (biologists) underestimate the commonness and importance of these friendships.
https://openspacetrust.org/blog/coyote-and-badger/

A generous orangutan
A lovely photo of a game warden in Borneo who was “clearing snakes” from a river when a WILD orangutan offered him a hand out of the water. The warden waded a few feet down and climbed out himself; when asked why he hadn’t taken the orang’s hand, he said “because it was a wild animal and you never know what it will do,” which is an intelligent response. But I think I might have taken the orang’s hand, out of curiosity.
https://www.instagram.com/p/B7phq1TFUyT

A kayaker and a 134-foot waterfall: what could go wrong?
Dane Jackson is probalby the best kayaker in the world. The footage is spectacular.
https://www.nytimes.com/2020/02/10/sports/kayak-waterfall.html

Military pollution
Militaries seem to be the least environmentally-responsible institutions in human societies. I understand wartime pressures, but still, their level of carelessness is unforgivable, as this story shows.
https://www.theguardian.com/politics/2020/feb/14/bombs-dumped-in-irish-sea-make-bridge-plan-too-dangerous

Mansplaining
This chart was created by the BBC reporter Kim Goodwin. It is amusing, painfully accurate, and potentially helpful for us males. Put it on your mirror and read it every morning, boys. 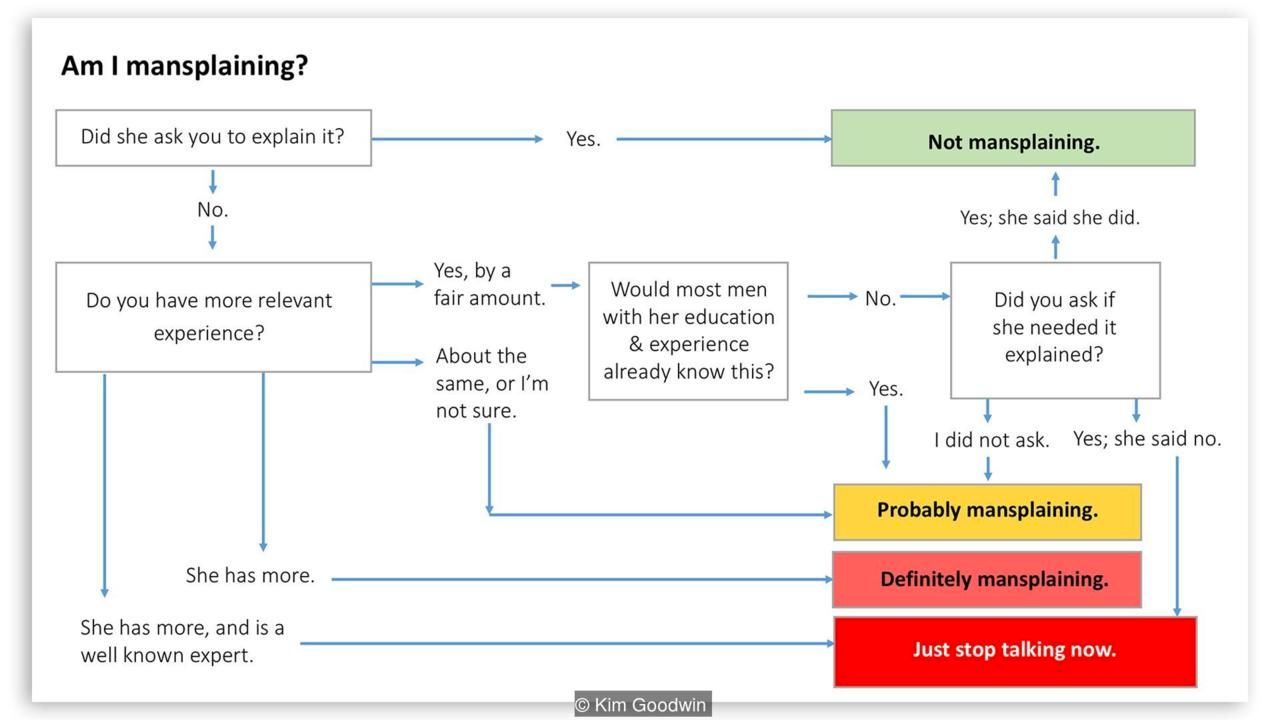