Meditation
A video story about a contemplative life that could be on another planet, for all its connection to our lives. What a lucky guy (except for the religion). Watch if you’re in the mood for something mellow.
https://www.bbc.com/reel/playlist/to-the-ends-of-the-earth?vpid=p05yb475

Climate change
A powerful short speech about climate change by a 16-year-old at the World Economic Forum in Davos. She says it like it is. Will her old-fashioned braids become fashionable? https://twitter.com/i/status/1088808723236175873. An accompanying NPR article is here: https://www.npr.org/2019/01/25/688793731/teen-inspires-youth-demonstrations-across-europe-demanding-action-on-climate-cha

The outer solar system
We’ve been seeing photographs of the Kuiper Belt object called Ultima Thule, which is the most distant object ever visited; it looks like a snowman. The BBC explains what it’s like out there (I added the boldface):

Several factors make Ultima Thule, and the Kuiper belt domain in which it moves, so interesting to scientists. One is that the Sun is so dim in this region that temperatures are down near 30-40 degrees above absolute zero - the coldest atoms and molecules can possibly get. As a result, chemical reactions have essentially stalled. This means Ultima is in such a deep freeze that it is probably perfectly preserved in the state in which it formed. Another factor is that Ultima is small (about 33km in the longest dimension), and this means it doesn't have the type of "geological engine" that in larger objects will rework their composition. And a third factor is just the nature of the environment. It's very sedate in the Kuiper belt.

Consider that the spacecraft is functioning at 30 degrees above absolute zero; how did the engineers even test the components on earth? I wonder if they have to heat it with nuclear power?

Is iron dangerous?
A fascinating article (but very detailed) showing correlations between high iron levels and all sorts of maladies, from diabetes to cancer. Most of the data are correlational (i.e., cause and effect aren’t proven), but two tidbits stood out to me: 1) people who give blood show improvement in lots of health markers afterwards, and 2) a clinical trial that reduced iron in 46 Alzheimer’s patients showed “at two years, iron reduction had cut the rate of cognitive decline in half.” One researcher says that almost no-one studies iron because it’s not “sexy,” i.e., there’s no money to be made in it for the pharmaceutical industry. http://nautil.us/issue/67/reboot/iron-is-the-new-cholesterol

Data visualization
One of the routes to better civilization, in my opinion, is through figuring out how to display information in ways that encourage the human brain to draw the correct conclusions from complicated data, despite our built-in limitations and biases. There’s a lot of talent and energy in data visualization these days. A visualization wizard named Mike Bostock worked for the NY Times through 2015, and during that time, they became a world leader in beautiful graphics. This article on the routes that representatives took to Congress is a nice example of a so-called “Sankey” diagram, although the page controls are a bit weird (in Safari, you scroll DOWN to make the text go RIGHT): https://www.nytimes.com/interactive/2019/01/26/opinion/sunday/paths-to-congress.html. You can click the little gray labels in the captions to isolate certain groups.

These “movie narrative charts” by Randall Munroe, the cartoonist behind the XKCDcartoon (a nerd favorite) are another fun example; they are a timeline that shows when characters are together. 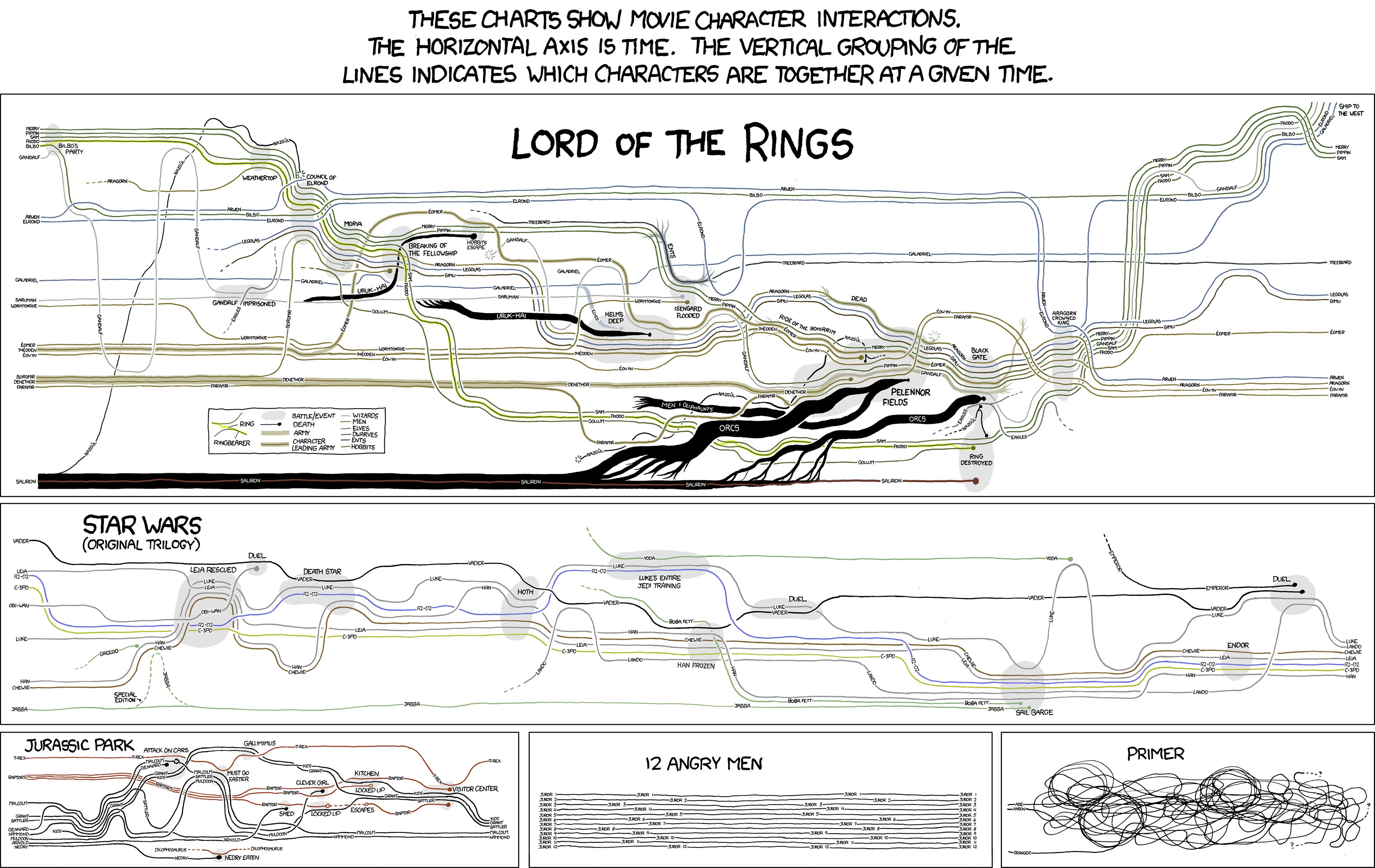 Economics and globalization
A wonderful article about the difference between Chinese and US manufacturing. It gave me a vivid understanding of what is really going on when companies ship jobs overseas, and why it’s hard to stop. Really worth reading.
https://nyti.ms/2HBT2QK

Sailing
A 73-year old just won a round-the-globe race where the contestants were only allowed to use paper charts and sextants and “normal” yachts. Hooray for the non-digital world, and for a 73-year-old who wasn’t afraid to climb the mast 7 times in the southern ocean! But just to keep things in perspective, the circumnavigation took 212 days, which is 5 times longer than the 42 days that it took a young French guy who just beat the round-the-world solo record in a state-of-the-art racing machine (the article’s not really worth reading).

Humor
The Gaston song. Pass on the timeless wisdom to your young ones.
https://youtu.be/qVdgaSuAjII

Books on social engineering for a better world