I have been collecting these bits for a while, so the list is much longer than usual. Don’t miss the geology story near the bottom.

Humor
Hilarious picture of a young girl before/after her first day of school. I adore her answer to “what happened?”
https://www.bbc.com/news/uk-scotland-glasgow-west-49445515

The attached photo is of Boris Johnson (who has made Brexit even more chaotic, if that was possible) attending a country fair somewhere in England. Someone handed him a bull to hold onto, and what a bull! I wonder if it was named “Parliament.” 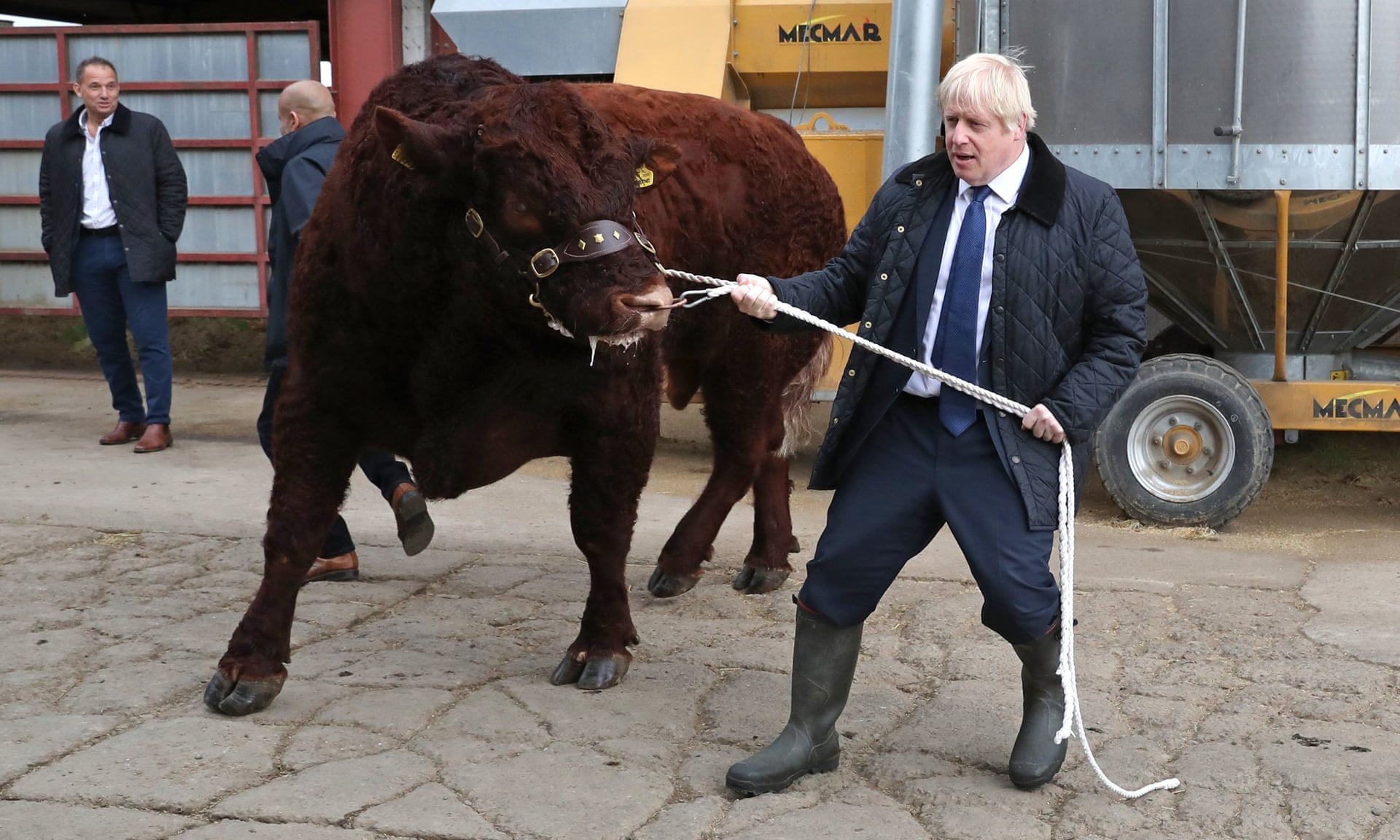 A great statistic from the BBC:
“Stroll through Paris first thing in the morning, and you’ll see lines of people snaking out of their local boulangeries for their morning bread. That’s because, throughout France, getting up early and buying a baguette is more than second nature; it’s a way of life. According to the Observatoire du Pain (yes, France has a scientific ‘Bread Observatory’), the French consume 320 baguettes every second – that’s an average of half a baguette per person per day and 10 billion every year.” http://www.bbc.com/travel/story/20190825-the-perfect-french-baguette

Women on the pill
“The stress hormone profile of women on the pill, research suggests, is similar to people who have experienced chronic stress. Other research has found effects on the immune system, learning and memory.”
https://www.theguardian.com/society/2019/oct/19/dr-sarah-e-hill-how-pill-influences-womens-brains

Oh bummer; it looks like the “no nitrates added” labels in processed meats only mean that some equally-toxic additive was used. Best solution: don’t eat processed meat.
https://www.npr.org/sections/thesalt/2019/08/29/755115208/duped-in-the-deli-aisle-no-nitrates-added-labels-are-often-misleading

Soccer seems to have a concussion problem, too: just like every other sport that involves hitting your head.
https://www.theguardian.com/football/2019/oct/21/landmark-study-reveals-link-between-football-dementia

Conservation
Most US farmers use neonicotinoids to prevent insects from eating their seeds. ‘Neonics’ are banned in Europe because they are toxic to pollinators. This new study shows that they are also extremely toxic to migrating songbirds. This is big news because the study is solid and dealt with real-world doses, so it can’t be easily dismissed. The article quotes a researcher saying, “Farmers are generally unaware of how bad these treated seeds are for wildlife.” That’s an opportunity as well as a problem.
https://www.nationalgeographic.com/environment/2019/09/widely-used-pesticide-makes-birds-lose-weight/
The original study (but you need a subscription to see it): https://science.sciencemag.org/content/365/6458/1177

Another recent, rather speculative study suggests that neonicotinoids may be responsible for killing aquatic insects in lakes, thereby starving fish species that eat them. https://www.npr.org/sections/thesalt/2019/11/02/775129512/controversial-pesticides-are-suspected-of-starving-fish

A very interesting, rather long, article about the history and future of air conditioning. The subtitle is “The warmer it gets, the more we use air conditioning. The more we use air conditioning, the warmer it gets. Is there any way out of this trap?” “In 1998, the American academic Richard Nathan told the New York Times that, along with the “civil rights revolution”, air conditioning had been the biggest factor in changing American demography and politics over the previous three decades, enabling extensive residential development in the very hot, and very conservative, American south. A century ago, few would have predicted this.” The Guardian also had an article about how Dubai is so bloody hot that the government is now air-conditioning the outdoors in parts of the city (yes, you read that right!)
https://www.theguardian.com/environment/2019/aug/29/the-air-conditioning-trap-how-cold-air-is-heating-the-world

The electrical industry—including the booming solar and wind sector—are using a lot of a chemical called SF6 that is the most climate-warming gas in existence (23,500 times worse than CO2). It’s used to prevent explosions when high-voltage electrical equipment short-circuits. Perhaps not coincidentally, that was also the function of PCBs, which turned out to be an environmental nightmare. SF6 is synthetic and does not break down naturally. The use of it is rising fast; so is the concentration in the atmosphere; and the industry is dragging its feet. Sounds like there aren’t proven alternatives yet, but one company was using “clean air and vacuum technology” to replace it.
https://www.bbc.com/news/science-environment-49567197

Engineering
Ever wonder what’s underfoot in an office building? This is a fascinating Wikipedia article on raised floors. Really! However, they fail to mention potential problems with RATS!
https://en.wikipedia.org/wiki/Raised_floor

------People--------
Congressman Elijah Cummings died recently. He seems to have been one of the finest human beings ever to serve in Congress. He recently presided over a hearing for Trump’s ‘fixer’, Michael Cohen, and his closing statement is extraordinary. Cummings was obviously winging it after a long and contentious day battling with Republicans, and yet his compassion for Cohen (who did some horrible things), comes shining through.
https://www.youtube.com/watch?v=72gy-LZ4UN0

A fantastic throw by a baseball player (just a few seconds long). Fans built a pyramid of beer cans and begged him to hit it.
https://youtu.be/oE2hGfUBnXA

My friend pointed out this wonderful obituary for a Russian cosmonaut who just died; he was the first person to walk in space, and his life story is wild.
https://nyti.ms/2Vx9TYm

Archaeology
T.E. Lawrence (Lawrence of Arabia) was a great admirer of Charles Doughty, who had explored Arabia earlier, and both men wrote a lot of interesting and poetic comments on the archaeology of the area, which was then—and is still—largely mysterious. Now a team is employing aerial imaging to look at the ancient Nabateans, who created the fantastic temple carved into the rock at Petra, Jordan. Just look at the photos – I think this landscape is incredibly beautiful (and barren, yes).
https://www.bbc.com/news/science-environment-49424036

Geology/Astronomy (read this one!)
There is a growing body of science that explains events on earth in geological time by asteroid impacts. I sent you the spectacular New Yorker article describing the K-T boundary event (the “big one”, which happened 66 million years ago), which hopefully all of you read. This paper is about a new idea. Apparently it is known that an asteroid 150 km in diameter somewhere out in the asteroid belt near Mars smashed into something else at high speed 466 million years ago, and broke up. The asteroid is referred to as the “L-chondrite parent body (LCPB)” because even today, most of the asteroids found on earth are “L-chondrites” and they come from that collision, which was “the largest documented breakup during the past 3 billion years,” i.e., in almost the entire history of earth! The researchers believe that the collision caused a rapid 10,000-X rise in the amount of dust in the atmosphere, which lasted (see if you can guess)…2 million years and caused the Ordovician ice age, the oldest of the 3 major ice ages that the earth has seen. The Ordovician cooling was rather gradual and coincided with a big increase in biodiversity.

The researchers say “Following the LCPB breakup, not only Earth’s atmosphere but also much of interplanetary space in the inner solar system became dusty, further shading Earth from sunlight. Dust from the LCPB breakup may also have fertilized large areas of the ocean, which could have led to drawdown of CO2 from the atmosphere.” The study is extremely thorough, and among other things they try to separate arrival of dust (deposition) from redistribution of dust by water (sedimentation) and other geological processes. They even use a physics theory called Poynting–Robertson drag. It says that particles respond differently to solar radiation depending on their size: large particles are unaffected, small particles are blown away from the sun, and particles of just the right size – between 1 micrometer and 1 mm in diameter—gradually spiral into the sun. The authors use it to estimate the arrival times of different sizes of dust particles from the collision in space. They mention in one of the figures that “the results in the figure build on a total of 1320 kg of limestone dissolved in acids.” Hah! Science at its best.
https://nyti.ms/2QrXdTA

Economics
An interesting bit of economic trivia: a recession can be prevented if the government injects enough cash into the economy before conditions get bad. Unfortunately, economists have always found it very hard to tell whether we’re in a recession until it’s much too late; i.e., until the cost of fixing it has gotten huge. An economist named Claudia Sahm recently discovered that if the unemployment rate jumps suddenly upwards by only 0.5%, that appears to be a reliable indicator that a recession is occurring. It’s the speed of the jump, not the size of it, or the overall level of unemployment, that matters. By this standard, we’re currently safe, and one of the reasons that the stock market hasn’t tanked is that a lot of people are watching the “Sahm indicator”.
https://www.brookings.edu/blog/up-front/2019/06/06/how-will-we-know-when-a-recession-is-coming/

Sarah Nelson, glaciers in the tropics, bacteria talk to us, Burning Man, and a happy animal story.