I signed up for this race because the drive down the Keys is one of the great wonders of America and I’ve always wanted to walk it. For 100 miles, the highway island-hops on long bridges across a shallow, turquoise sea that stretches to the horizon, patchy with reefs and dotted with the rounded shapes of low islands, most of them uninhabited and overgrown with mangroves. Pelicans fly alongside the highway and people fish beneath the bridges. The natural diversity of Florida is very high, and I like the relaxed attitude of the people in the Keys. 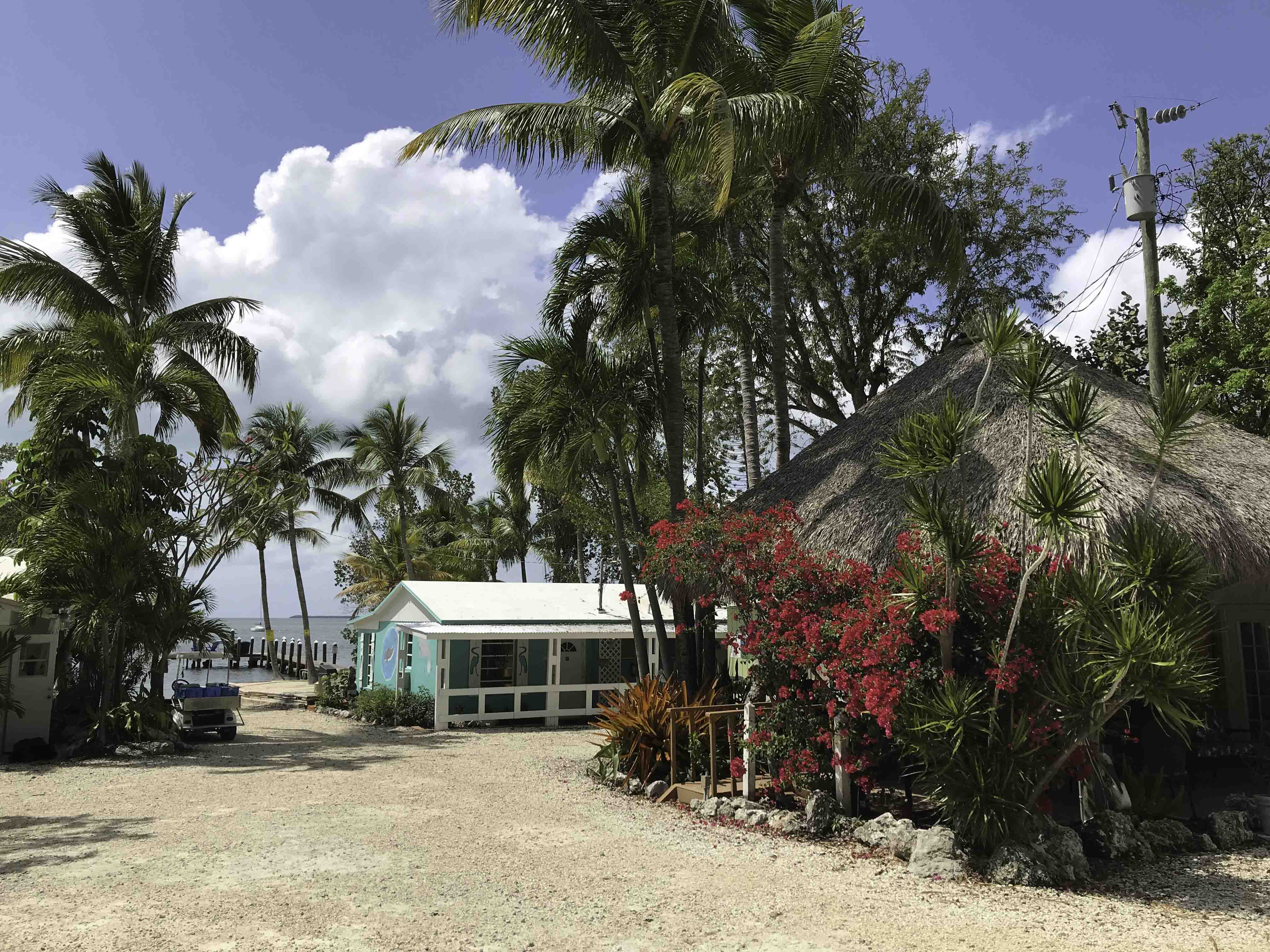 I had done a lot of road training through the winter and spring, grinding out hundreds of miles running boring loops around my home territory in the Northwest through snow and ice, rain, fog and sun, training at a very low heartrate with the Maffetone method. Then at the peak of my training, just 3 weeks before the race, I got the flu (Influenza Type A, which does indeed have a Type-A personality) at a dinner party. It knocked me flat for almost 2 weeks, I got a follow-on cold after running 32 miles a bit too soon, and so I was feeling rocky and anxious going into the race.

This year's race set a record (219 starters) for the number of people running the 100-mile race, and we were started in waves 5 minutes apart. It meant you were never really sure whether someone was ahead of you or behind you, but that worked for me because I had promised myself to heed the best advice I ever got on ultra-running. That advice was from the race director of the unsupported Plain 100, Tim Stroh, who told me “Be patient.” I was (still am) a nobody in the running world, and Tim gave me the moral support I needed to try my first 100. I will forever be grateful to him for that bit of generosity.

The first couple of hours down Key Largo and across the first couple of beautiful inter-island passes, through which the sea poured in a mass of turbulence and bubbles, were really lovely. Before the sun got high enough to hit us, I felt jubilant and lucky to be running. My water was lasting just about long enough to make it 10 miles between aid stations, and my heart rate was a little higher than normal from being sick, but still acceptable. But when the sun came up, I realized very quickly that the game had changed and the conditions were going to be brutal. I asked my wife, who was my wonderful one-woman crew, to buy a cooler, fill it up with ice and water, and meet me every few miles. I wasn’t carrying enough water to make it between aid stations, and the ice that I was tying around my neck in a bandana and stuffing under my hat would completely melt within 10 or 15 minutes.

The day got hotter and hotter and the sun was relentless. The clouds and storm that had been forecast never materialized, and the race director later told me that it was one of the hottest 3 or 4 races they had run. Just before mile 50 there is a stretch nicknamed “Hell’s Tunnel” where the road runs between high bushes for 2.7 miles, with stinking swamp on both sides. The air is windless and dead and there is zero shade. The sun beats down from above and the overheated air rises back up from the sizzling-hot path so that it’s like running through hot syrup. I ran it nonstop because I figured it was better to get it over with, but I was dizzy and nearly fainting by the time I finished. At the far end, I slumped in the back seat of the car, eyes shut and mouth hanging open, barely able to say “yes” or “no” to my wife’s questions. The ice and water brought me back to life within surprisingly few minutes, and I was off again. That pattern repeated itself many times. 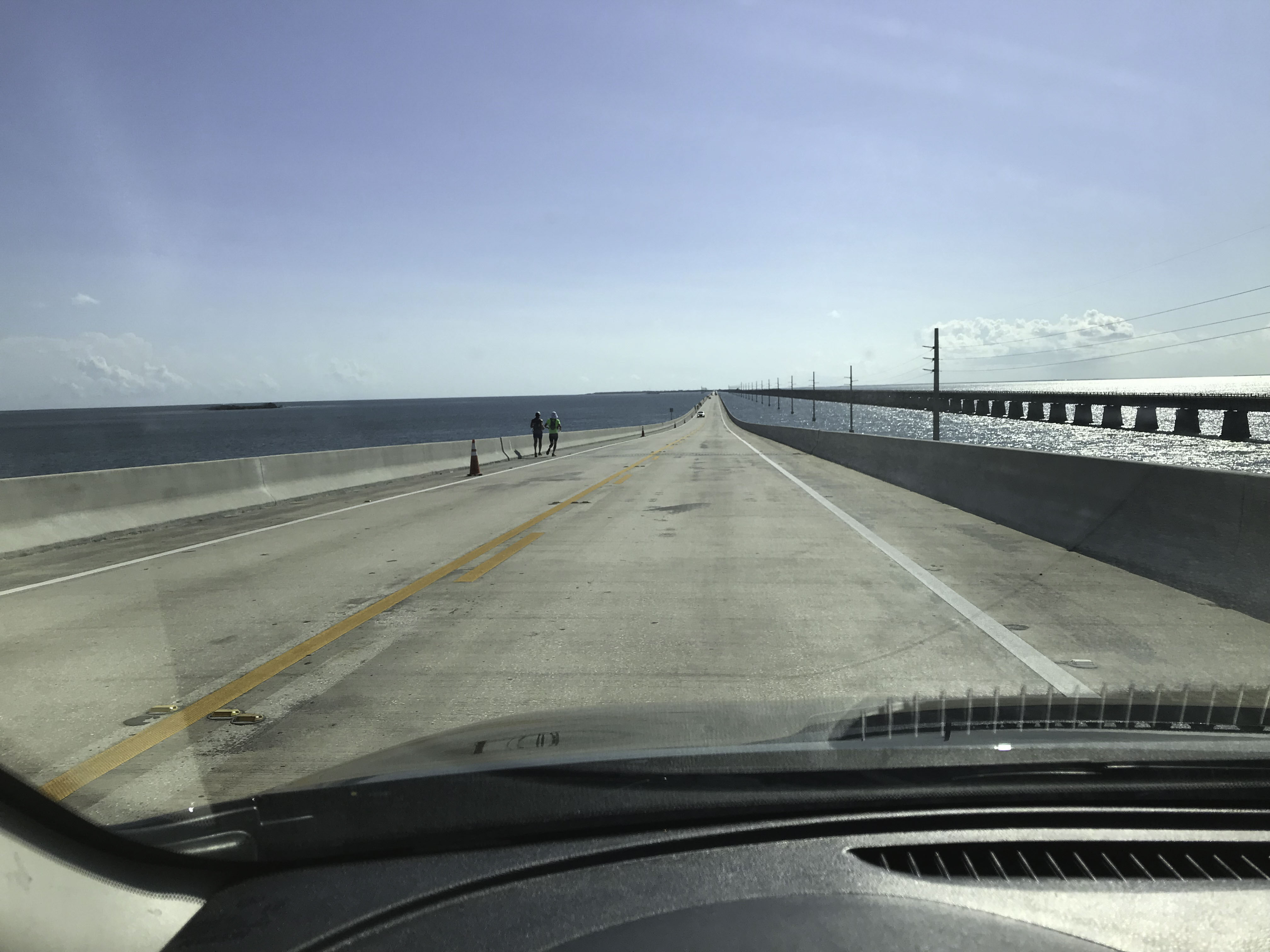 The next big obstacle was the 7-Mile bridge, where runners cannot pick up any aid. I was looking forward to it because I figured nothing could be hotter than Hell’s Tunnel, but it very nearly was. We had a slight tailwind which reduced the sensation of air movement, and the sun had dropped down in the sky directly ahead of us so that we had full frontal sun. It was like being in a broiler. On the bridge, and in fact for nearly half of the race, runners are on the shoulder of the road, about 6 feet away from cars and trucks barrelling by at 60 or 70 miles an hour. I had anticipated that it would be noisy, and I wore earplugs for some of the louder stretches, but the traffic was nonetheless unpleasant and dangerous. A race volunteer told me that at one point they had 3 runners who had succumbed to heat lying flat on that narrow shoulder in fast traffic on the 7-Mile bridge, all of whom had to be rescued simultaneously. The highlight of my own race occurred on that bridge, when I looked down and saw a very large sea turtle. It was probably a green turtle, and its carapace measured 3 to 4 feet across. It had just surfaced, and I watched it gracefully and slowly dive, its shape getting more and more wobbly and green-blue as the depths closed over it. It was gorgeous to see such a large, peaceful being, unmolested and independent. I also saw at least 10 large green iguanas on the foot paths. They eyed me confidently, as if to say, “You and what army, buddy?” And twice, I saw magnificent frigate birds wheeling above passages. They are among the most graceful and acrobatic flyers of the whole animal kingdom.

Many of the bridges had alternative pedestrian/fishing bridges, and those were fun. A real diversity of people inhabited all of the little fishing niches, including some that were literally miles from shore. People had lugged out chairs and umbrellas, fishing rods, bait, buckets, cutting boards and knives, radios, coolers full of beer and food, and one group even had a gallon of bourbon. The fishing ranged from quiet and reserved loners, to semi-commercial (a guy with 10 fishing rods) to surly crews with horrible messes--garbage, fish guts, gore and half-dead fish everywhere--to families having a great time with kids. People were very supportive and nice (cars honked and waved, too). At one point on a high bridge I passed a party boat about 100 feet below me, filled with shirtless dudes and girls in bikinis drinking beer, and one of the guys shouted up “How far do you have to go?” “35 miles,” I answered. “Right on, go for it!” he shouted. That made me smile; endurance events bring out the best in people. 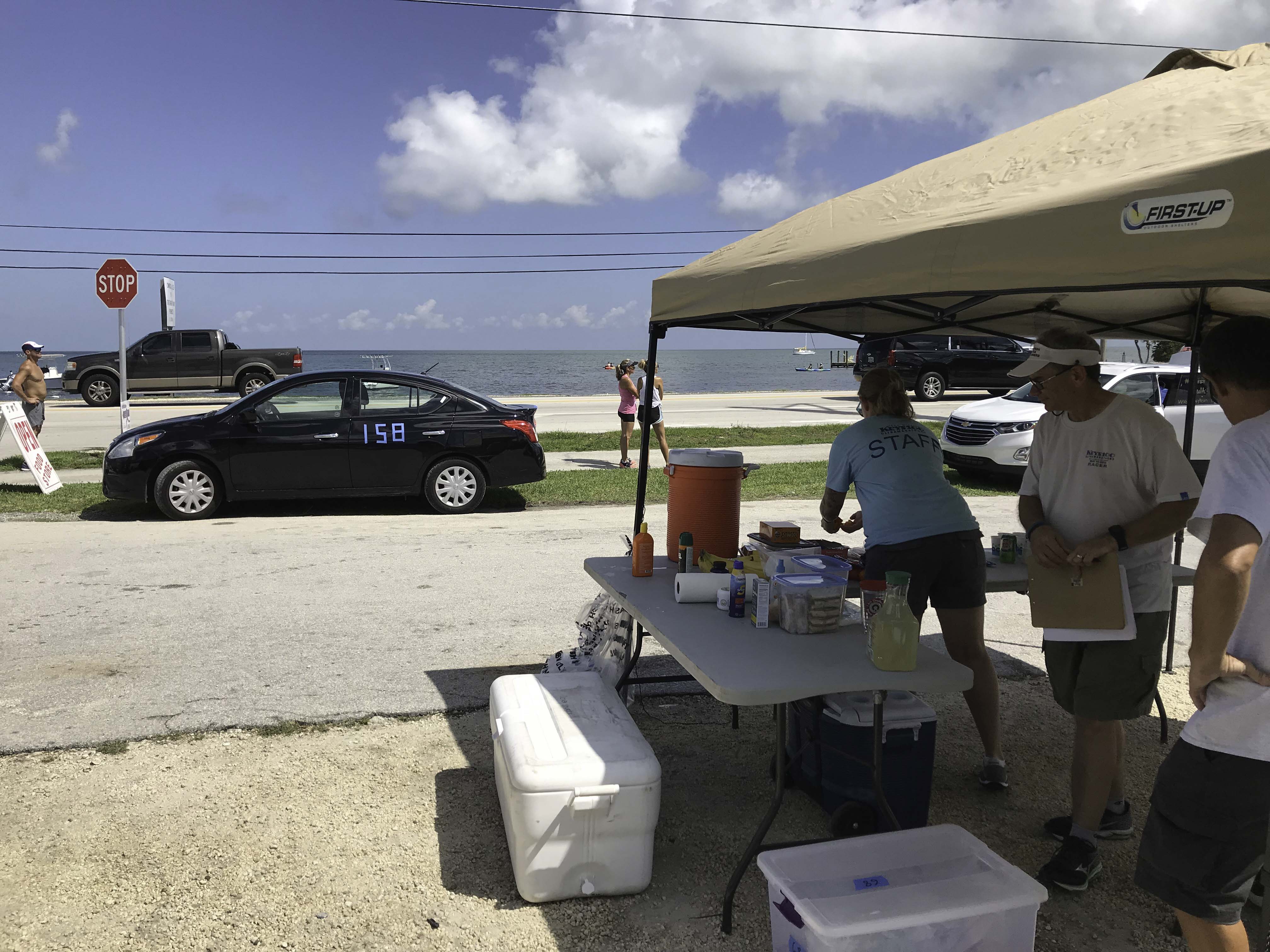 I had a couple more nearly-passing-out episodes in the heat, and was interested to see much later that my heart rate had plunged when the heat hit (I would have expected the opposite). It didn’t recover at all until 13 hours after the sun had risen, when we finally began to get some shadows. Nightfall was a benediction that we were all profoundly grateful for. Despite my exhaustion and many miles running on the left-sloping shoulder against oncoming traffic at night, I mostly really enjoyed the cooler nighttime hours, which culminated with a long, perfectly silent and meditative run down Roosevelt Boulevard just before 2AM, with the silvery, moonlit ocean stretching all the way to Cuba on my left, several darkly-tanned, leathery Keys residents sleeping on benches—not even a blanket needed in that climate!--the full moon overhead, and not another racer in sight. It was a nice way to finish.

The race had a 39% dropout rate (134 finishers out of 219 starters) https://my1.raceresult.com/126157/RRPublish/pdf.php?name=Result Lists|100M Finish List&contest=3&lang=en.
I came in 20th and won my age class, but I was beaten by two people my age or older, both women who had very impressive records and many wins including the Badwater 135. But all of us, including those impressive women, may as well have been a different species than the young man who won and set a new course record for the Keys 100, sustaining 100, 8-minute miles on average despite the heat and whatever stops he made for food, drink, ice, bathroom breaks, or anything else. As the race directory said at the award ceremony, “His time looks like a misprint.” It was a nice group and I really enjoyed the other runners, who included many stars of the ultra-running world and some real characters (here's to you, Dean!) 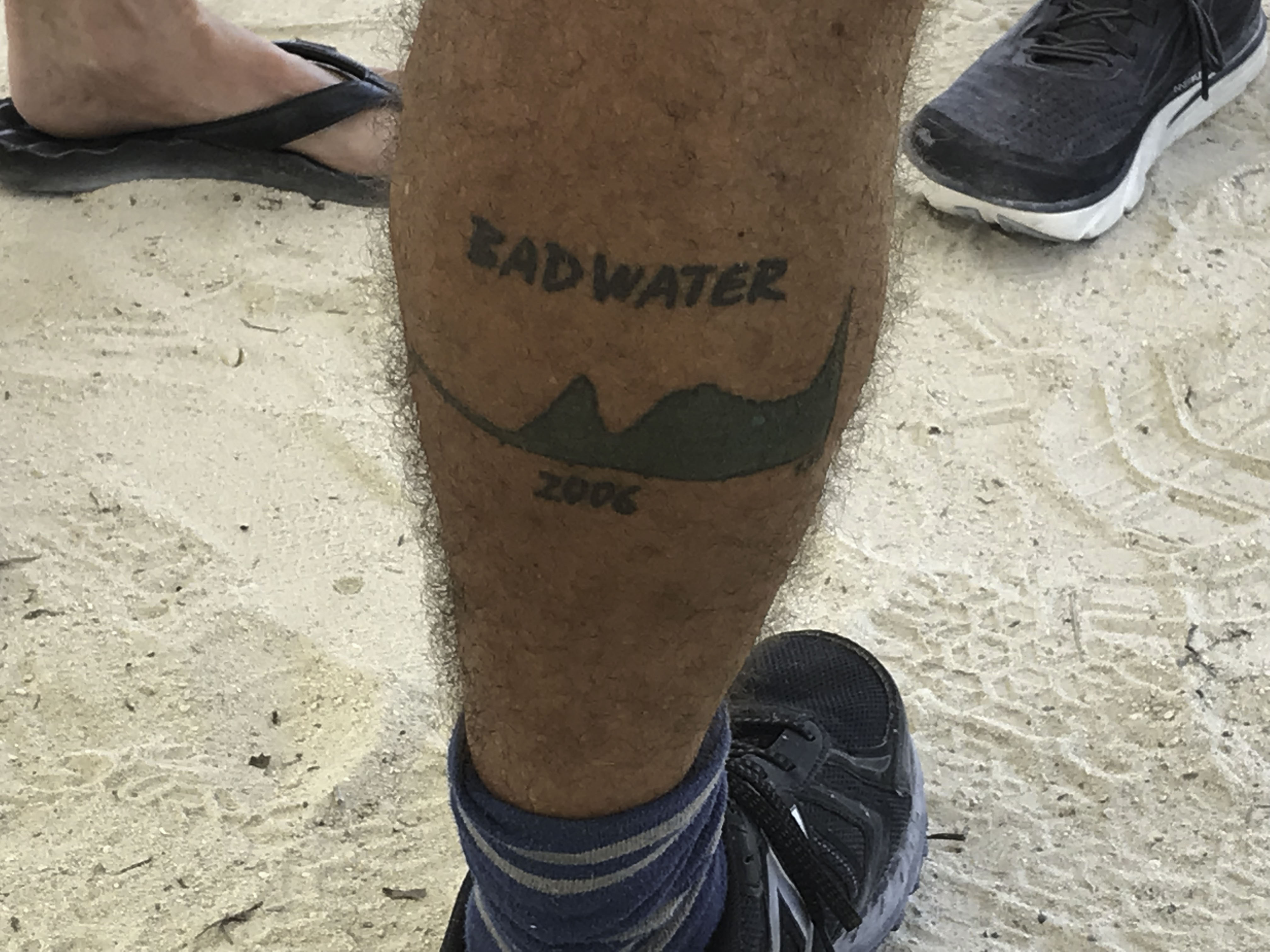 My recovery was kind of interesting; the race ended for me on Sunday at 2AM and I spent the rest of the day in bed, feeling queasy and so sore I couldn’t sleep. I had hardly eaten during the race and barely ate the rest of Sunday. That’s not normal for me, and I think that was my body’s reaction to the heat. My wife went for a long swim around the southern end of the island while I was lying in bed, and reported that much of the coral is dead, and there are many fewer fish and birds than there should be (we are both biologists, so the hazard of seeing that kind of thing comes with the territory – once you’re aware of it, it’s very hard to “unsee” it). The fishing pressure is extremely high, and I was also struck by the fact that I’ve never been anywhere that uses more plastic and Styrofoam, nor that makes less of an effort to deal with its waste, than the Keys. It's sad to see such a tremendous human toll on nature combined with an apparent lack of interest in doing anything about it.

By Monday, I felt more normally sore and tired and was suddenly ravenous; by the afternoon, I could walk briskly up and down a long, steep set of stairs without hands. We spent Tuesday in planes and airports, and I came down with a full-on cold, or maybe it was the old one returning. We saw a large, powerful waterspout on the drive back up the Keys, emanating from a huge thunderhead with a dense, dark-blue flat bottom that was producing heavy rain, all a few miles away over the sunlit sea from the hot, dry road we were on. 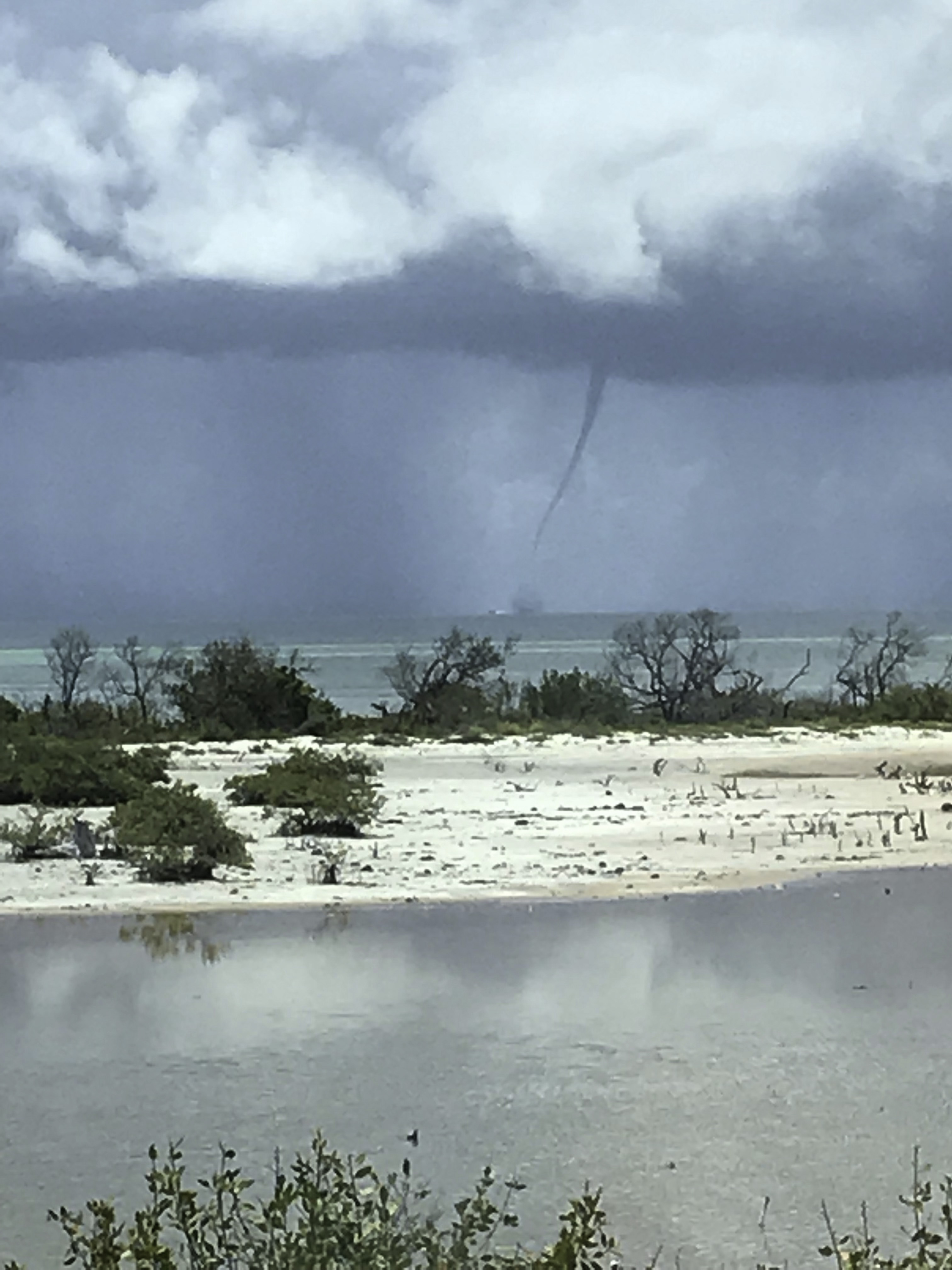 I went for my first slow, 5-mile run on Thursday but was almost as slow as I had been at the end of the ultra. “We’ll see you next year,” said the race director. No, you won’t, at least not me. I don’t love running on a busy highway and I think if I try heat again it will only be to go all-in on a race like the Badwater, but the Keys 100 was a memorable experience that I’m grateful to have had.

I want to share what I tell myself when I am unhappy. First, There’s nothing wrong with you if you are unhappy. Life is difficult at times. So Go ahead and grieve. Grief is useful; it helps us to honor those things, ideas 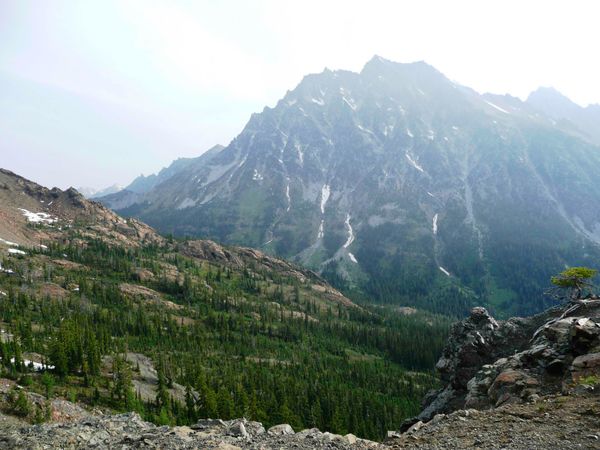 This is the story of my first big-ish alpine climbing route, which turned into more of an epic than we intended. Thursday night I was up fairly late preparing because