I ran the Fat Dog 120 this weekend. Outside Online magazine called it one of the 9 hardest ultramarathons in the world. I'm sure something worse will come along next year, but it was certainly challenging. The race follows a 120-mile course in the Okanagan mountains of British Columbia, just north of the Canadian border and about two hours east of Vancouver. Highway 3 winds through deep, lushly forested valleys with cliffs looming on both sides over narrow rivers, and you cross the magnificent Fraser River before reaching the park. 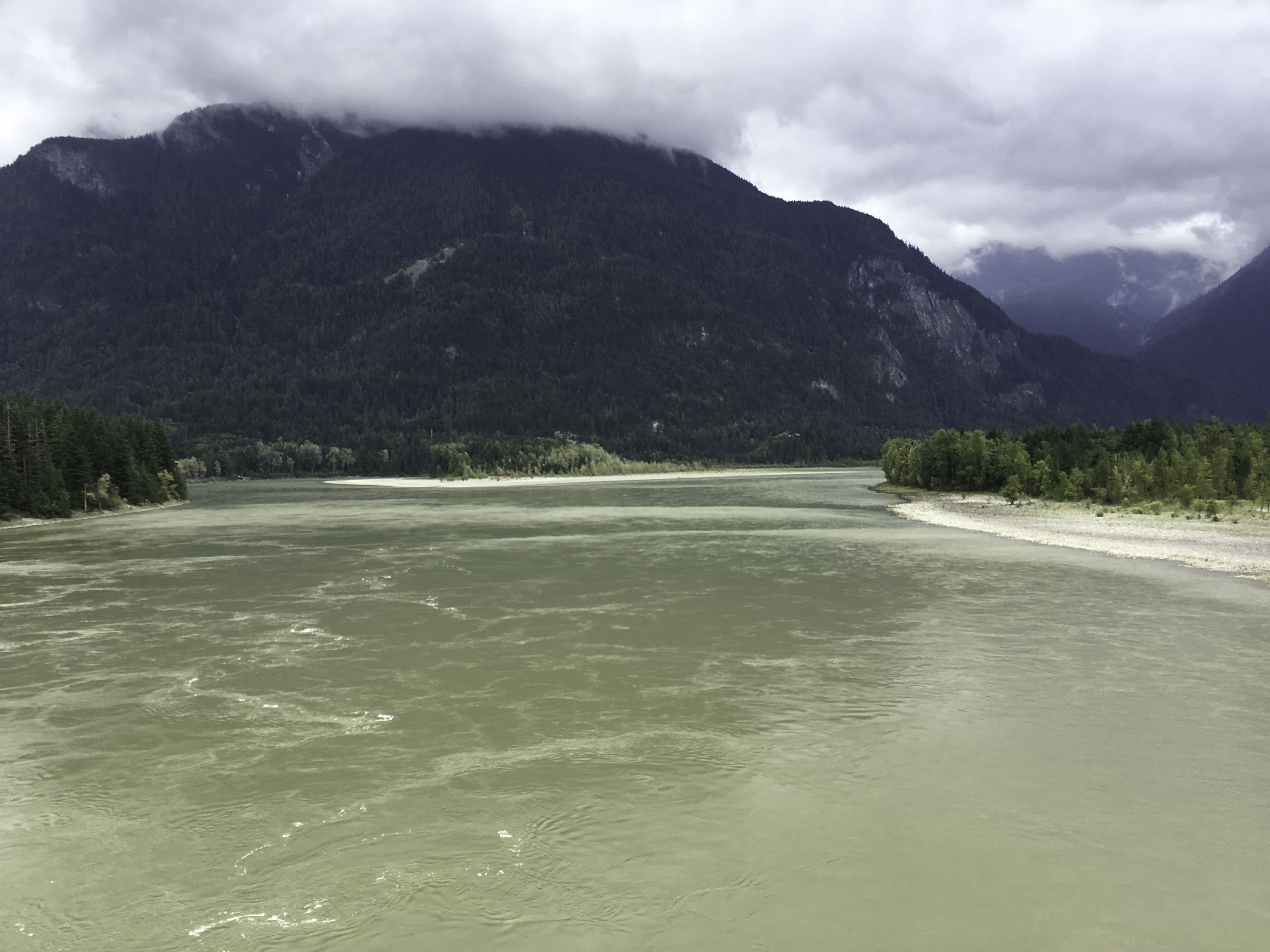 The mighty Fraser rolling through the town of Hope.

Dwight Eisenhower said about preparing for battle, “Plans are useless, but planning is indispensable,” and I certainly put that idea to the test. I made a string of mistakes in my preparation, including leaving my carefully-marked set of maps and course directions at home, and missing the deadline for getting my drop bags to the race directors, so I ended up making drop bags in about 10 frantic minutes as the volunteers closed up. As a result, I forgot to add a backup headlamp for the second night, and in a confused rush to find the bus the next morning I also failed to prepare any food or put on sunscreen. My best-laid plans went out the window the moment the race began.

The weather was ideal. It was cool and overcast on the first day, and we had about 2 hours of light rain on the second day. It was a pleasure to be running so light and easy through the high, flowering mountain meadows and breathing the intoxicating scent of sun-warmed fir trees. The trail conditions were generally excellent, consisting of miles of soft, forgiving dark humus under conifers and smooth sections of dirt running across meadows; in this respect, I preferred the course to the Teanaway 100 or the Plain 100, which are the only other mountain ultras I have done. Relatively few sections of the course were un-runnable although it had its share of steep descents, scree, roots and boulders, stream crossings, and mud. The course was well-marked for most of its length, and I doubt that anyone got lost for more than a few hundred feet at a time. Doubt did creep up on us in some sections at night where the markers were far apart (Oh please God, tell me that wasn’t just another false summit!) and I met two guys going the wrong way out of an aid station at night and was unable to convince them to turn around. 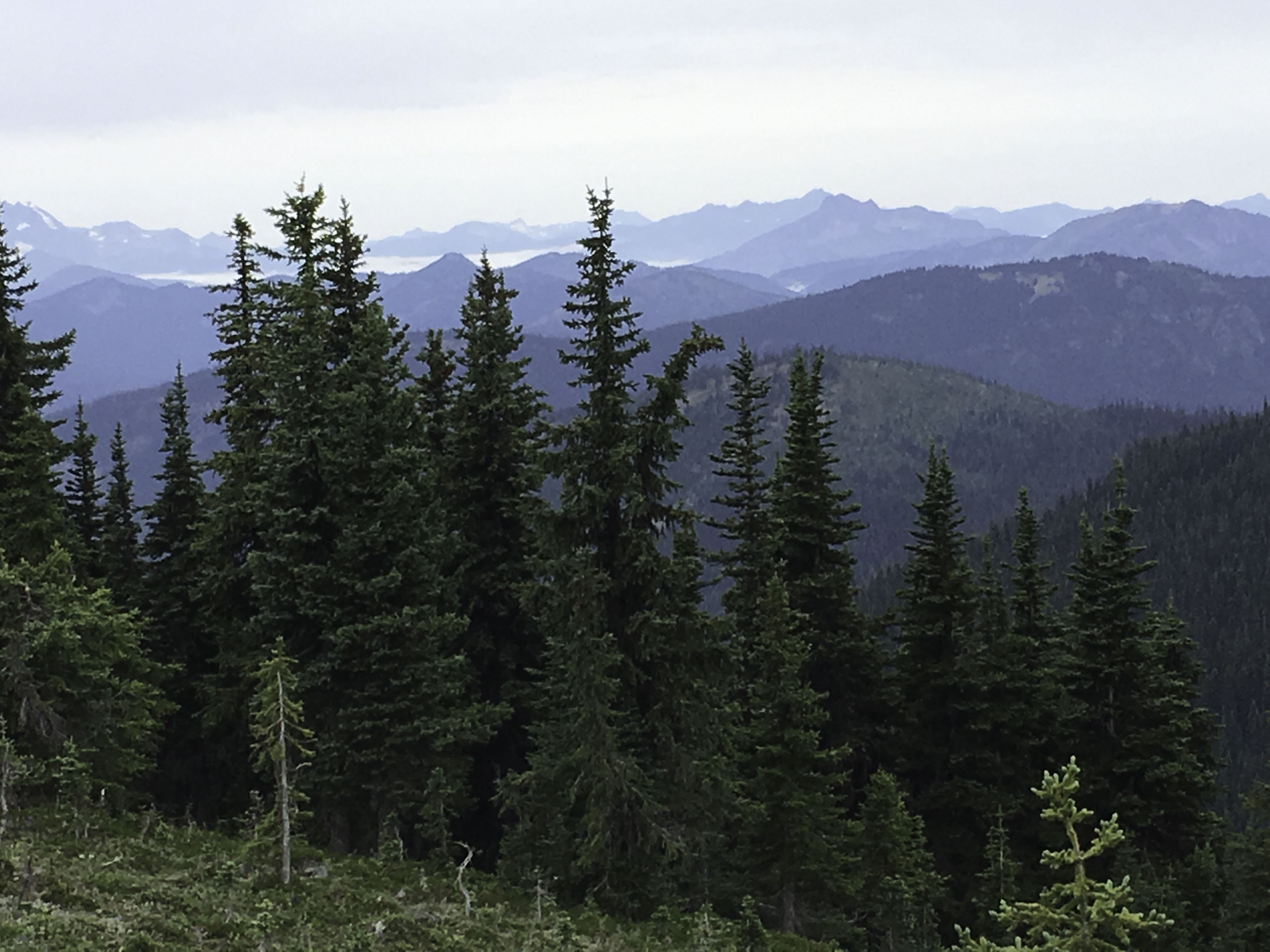 Looking south from the Heather trail at the North Cascades across the US border.

Thus, the only real difficulties of the course were its length and elevation gain: 120.5 miles and something like 24,500 feet. Perhaps the defining feature of this year’s course was its two final climbs. The first of them, 3600 feet up Frosty Mountain, came after the 100-mile mark and was daunting on tired legs. Frosty is the largest mountain in the park. After descending, the trail swoops tantalizingly close to the warmth and light and good cheer of the finish-line party, but the exhausted runner must turn back into the darkness for another 9 miles and the final 2400-foot climb. My son had advised me to think about what I am grateful for, and though it felt like an artificial exercise, it truly helped me to stay in good spirits.

Ultras force you to confront your illusions and prejudices, and to admit that success is somewhat arbitrary. That makes you more tolerant of your own failings, which is liberating, and less judgmental of others, which makes you a better person. In this race, I discovered that I was slower on steep climbs than most of the runners around me. Most (perhaps all?) were much younger, so I don’t know whether my age-specific lower maximum heart rate limited me, or perhaps I should have trained my thighs more specifically for climbing. It felt more like a whole-body energy deficit than a leg problem: Huh, the tank is empty again!

In any case, a lot of runners passed me going up mountains, but I’d often re-pass them on the way down, where my superior balance over rough terrain came into play. I felt like an impostor who didn’t really belong in the speedy bunch I was with. I don’t know how many times I said “Hello again!”…and then a minute or two later: “Go ahead, you’re faster than I am.” I enjoyed running and chatting with a friend I made on the second night, but I felt it as a mild insult when he called me “Mr. Consistent.” I’d much rather be the flashy hare than the boring tortoise! The evidence suggests that I'll have to settle for being a tough old tortoise, although I’ll continue to deny it as long as possible.

I crossed paths again and again with two young women, probably in their 20’s, one of whom was pacing the other. They wore matching shorts and the pacer was particularly gorgeous, with a mane of long dark hair and a kind of TV-ready glamour that seemed both difficult to achieve and ridiculously out of place in the mountains. They talked loudly for hours as we passed and re-passed each other, and I initially pegged them as kind of superficial and dumb. I had to reassess my prejudices as I gradually realized, with chagrin, that a) the runner was truly, as her friend said, “one tough chickie,” and b) the pacer was also tough and resourceful, and was superbly talented at coaching her runner, which requires a blend of tough love and clever psychology. The runner started feeling sick to her stomach around the 80-mile mark, and yet they somehow managed to jointly pull her of the slump, and I think they finished ahead of me. The great length of a race like this beats it into your head that the competition really is between you and yourself, not you and others. The camaraderie that develops between runners is one of the best things about long races.

The 3600-foot climb to the top of Frosty Mountain at mile 102 culminated in a scramble over steep, exposed rock and scree at the top. I reached the summit in perfect weather a couple of hours before dusk, but other runners were not so lucky, and some encountered it after midnight in rain and fog. It is not hard to imagine a future runner being seriously injured on those cliffs in icy conditions, if the race directors keep this year’s course.

Looking east from the top of Frosty.

The motto of the race is “Suck it up whiney baby,” which is printed on all of the merchandise. Would it be whining to point out that “whiny” doesn’t have an ‘e’ in it? Or that the phrase should include a comma, or that it would be a good idea to have the correct distance between aid stations on the course maps, or to make sure that the aid stations haven’t run out of food when the 70-milers come through after the 120-milers? Runners have come to expect that ultramarathon race directors, like drill sergeants, are at least mildly abusive. I heartily approve of the principle that we should all take responsibility for our lives, but leaders should practice “extreme ownership” themselves, as two ex-Navy Seals call it. In any event, the Fat Dog organizers did reasonably well and the volunteers were wonderful (a woman who was mother-henning me at an aid station cooked me the best quesadilla I ever ate, really!)

On the way down from the summit of Frosty Mountain, I nearly stepped on a male spruce grouse who must have been absolutely soused in his own testosterone. He was all puffed up, fanning his beautiful white-spotted tail feathers and making little purring sounds (I’m sure they were meant to be threatening) when I appeared--a sweaty giant, taller than a building, charging down the trail at him. He not only didn’t yield the trail, but he made a little foray and rushed at my leg. I’m not sure what he planned to do—scratch my ankle? I placed my pole between us and then got my phone out to take a picture, by which time his bravado was beginning to yield to common sense. The drama going on inside his brain must have been deafening; the testosterone-soaked idiot bellowing “I can take him!” while the rational part of his brain was screaming “Ruuuuuuuun!” I laughed about it for quite a while. 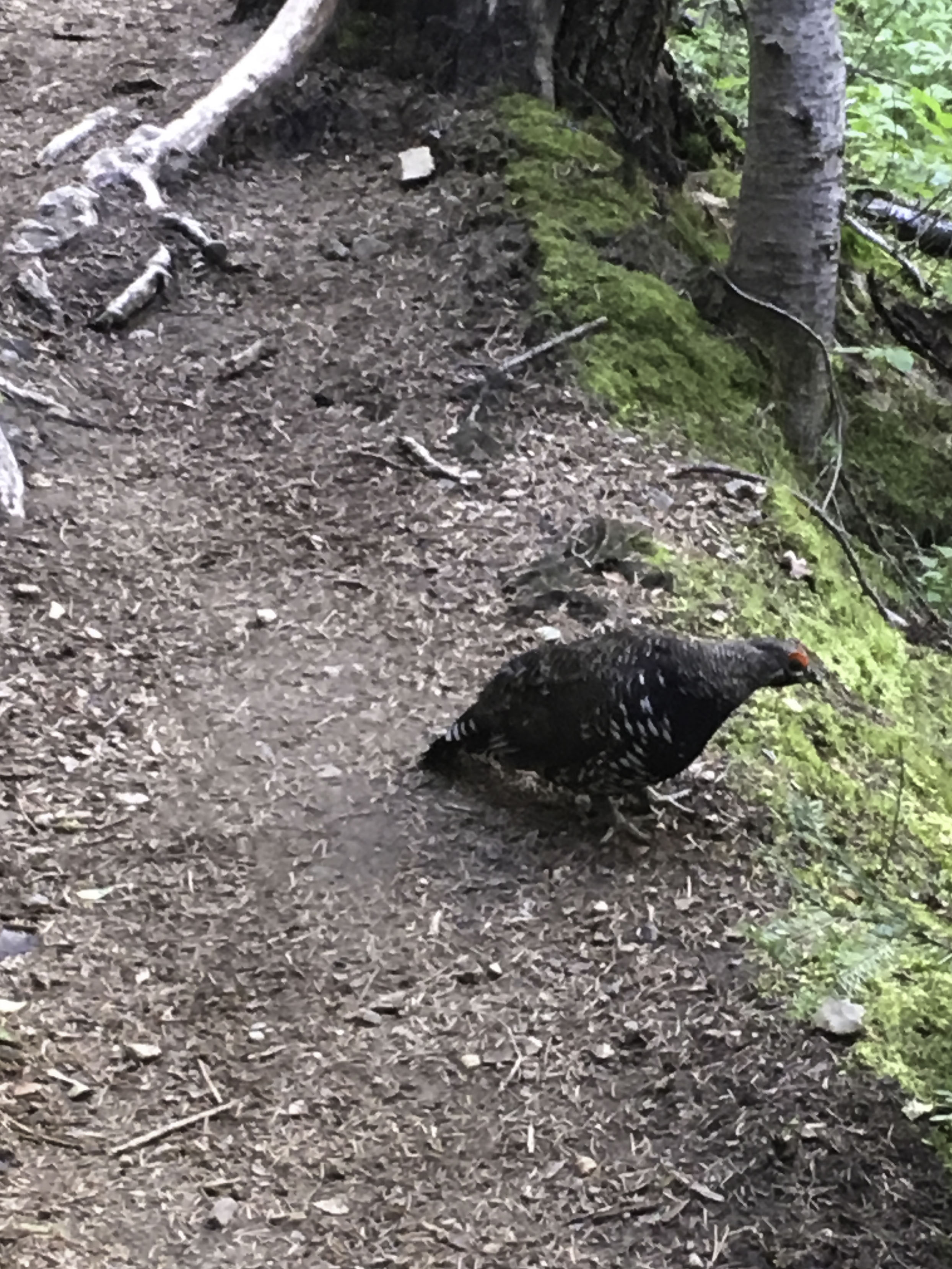 Oh yeah? You and what army?

I started the final ascent near dusk and climbed as far and fast as I could in deepening twilight to preserve the last vestiges of my primary headlamp’s battery, which had been depleted by the previous night’s run (my secondary light, which was supposed to last more than 20 hours, had died after 7 hours, and I had no way to charge either of them). As it happened, the primary headlamp stayed alive just barely long enough to get me home, although it had started flashing warning signs early on the descent, and my watch (my primary navigation instrument) had already quit. I wasn’t really worried; I knew I could just have a nice nap on the trail until another runner with a working headlamp showed up. A nap is a very welcome idea during an ultra, to put it mildly. Nevertheless, it was a reminder of the limitations of the electronics we all rely on. All 3 devices failed at least 30% before they should have.

I finished in 38:43, 35th out of 95 finishers (140 racers started, so the dropout rate was 33%). After the race, my internal electronics were in a desperately sleep-deprived state and exhibited a frightening ability to lose the thread on the 45-minute drive to my motel at 2AM – a harrowing journey that I was foolish to attempt without a crew.

Another ultra done! I continue to ask myself why I do them, and to doubt whether I’ll do another. Why not switch to some sport—any sport at all--that is more rewarding? I certainly don’t like the endless hours of boring training. But in some ways, this one was the easiest race yet. I had few doubts or fears once I was running, and I think that confidence—that quietness of mind unmarked by doubt and fear--is probably the best reward for all of the suffering.

Books on social engineering for a better world

I want to share what I tell myself when I am unhappy. First, There’s nothing wrong with you if you are unhappy. Life is difficult at times. So Go ahead and grieve. Grief is useful; it helps us to honor those things, ideas