I just ran the inaugural Teanaway Country 100-mile race. A few days before the event, the organizers shortened the course by a few miles due to a wildfire that threatened one end of it, but the race was every bit as beautiful, and punishing, as promised. The final course measured around 95 miles with a total elevation gain about 29,000 feet (and yes, an equal elevation loss) which puts it among the hardest ultras, at least until someone dreams up something worse.

About 75 runners started the race, of whom around a third dropped. Given the race’s level of difficulty, the relatively low dropout rate is an indication of how many very talented young runners, both male and female, participated. It was an out-and-back course and I made it to the turnaround at 12 hours, despite a wrong turn that cost me 1.6 miles and 1300 feet of elevation change. I was feeling satisfied (if tired) until my thighs gave up and I had to renounce my hopes of recording a fast time. Last year, on my first 100-miler my only goal was to finish, and I suppose the changing nature of my expectations may be a sign of progress, despite the problems I had. In any event, it took me nearly 18 hours to make the return trip and I finished just short of 30 hours, placing 21st in the middle of the pack. The winner finished in 20:07, beating everyone else by hours, a truly amazing feat by an exceptionally nice young man.

After my breakdown, I lounged at every aid station. I’d tell myself that I would breeze right through, but by the time I arrived I would be so tired that I would need to sit for a couple of minutes. The volunteers that manned the stations were a happy crowd. They had driven over very rough roads to bring in supplies and had committed to hang out all night in the cold and dark while caring for exhausted runners, and they seemed to be united in a total determination to have a good time and to share their joy. A party atmosphere prevailed (I remember a woman in a full-body shark costume, and AC/DC blasting on one brief stop). Some stations had propane heaters that produced welcome warmth despite being in open-sided tents. When your body is stressed and you are wearing wet shorts and t-shirt in sub-50-degree weather, you get cold immediately whenever you stop. Time after time on the return trip, I sat in a camp chair for a few minutes and one of the wonderful volunteers would bring me a blanket or a cup of warm broth (delicious), some fruit or a bite of sandwich or quesadilla—I preferred whatever they had that approximated real food—before I girded up my loins, turned on my headlamp and went back out into the night, alone.

The penultimate 9-mile leg from Gallagher Lake to Sasse Ridge aid station is representative of the soul-crushing nature of the course. By the time I left the Gallagher Lake, I had already run 78 miles, climbed about 25,000 feet and descended something like 22,000 ft. It was a bit before dawn, and chilly. I dropped 1,150 feet into a valley, thighs shaking, then scrambled 1,000 feet up a very steep, sharp ridge and plunged, half-sliding 1,350 feet down the other side; like many of the downhills, it was too steep to really run. But my work wasn’t done, and the trail climbed 1,150 feet back up a heavily-timbered ridge in front of me. “This must be Sasse Ridge,” I thought, wobbly-legged and panting at the top, but the trail began to descend again, and the aid station never materialized. When the trail dropped sharply 700 feet back down into the bottom of a swampy valley, I realized with a sense of desperation that I was going to have to climb the towering ridge on the other side, its rocky top shrouded in fog. When I finally made it 1,160 feet up onto Sasse Ridge, the trail climbed another couple of hundred feet over Sasse summit, as if to spite me, before dropping a mind-numbing 720 feet down the spine of the ridge to the aid station. The course seemed to be pounding its message into my body: “Resistance is useless!”

From Sasse, it was a 6-mile, 2,600 foot slog down a forest road to the finish line. I couldn’t move any faster than a speed-walking pace by then and I didn’t want to get passed by another racer at the last minute (a comical dilemma), so when it began to rain, I just gritted my teeth and made for the barn. It poured all the way down, and I limped over the finish line soaking wet and freezing.

It wasn’t all terrible, though. It feels like a privilege to be moving fast and light in the wilderness, and if you are not too tired and not under too much time pressure, your abundant sense of freedom enhances the beauty that is all around you, even at night. Highpoints included a spectacular pass near Earl Peak with huge, rocky crags surrounding a sweeping valley which faded into blue at a great distance. At night, you could see lights twinkling at its far end, at least 30 miles away. My wife and daughter drove up to the event and were great supporters. My daughter paced me from Beverly-Bean aid station to Iron Peak, up 2,500 ft and down 2,200 at night, and it was sweet to have her company after 60 miles of running alone. Later, I saw the eye shine of what must have been a large elk in the forest, and heard something (a bear?) groaning deeply and softly nearby, and the stars at a 6,000-foot pass near the end of the race were among the clearest I’ve ever seen.

Today, one day later, I’m very sore, but making progress. Yesterday, I had to hold onto the stair railing with both hands to get up our steps; today, I can climb them without hands (very slowly) but I still need one hand to descend. My knees and thighs hurt, my feet are sore, I have some small blisters and bruises, sore shoulders, a sore elbow and a little bit of loss of sensation in my thumbs from using poles, eyes irritated from trail dust, and a few other minor inconveniences, but I’m sure that sleep and food will cure it all within a few days. I promised myself during the race that I’d swear off this foolishness, but there were runners who still looked fresh after the race (and could actually run!), which makes me wonder if I could achieve that level of fitness by training more. I may drop ultra-running altogether and take up surfing, or maybe I’ll just try a new variation—through Death Valley, or down the Florida Keys, or across Alaska in January. I really don’t know. 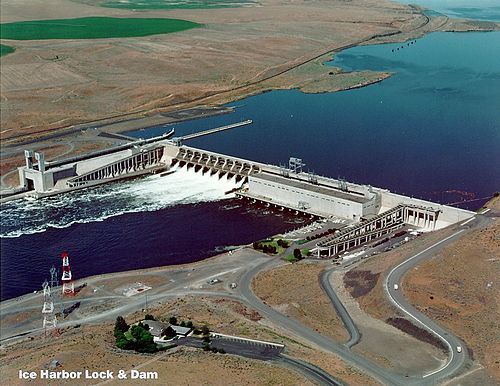 There’s been quite a lot of interest lately in removing the lower Snake River dams, and people have asserted that a) removing them would cause a huge increase in

One of the truest tests of character is a person’s ability to overcome self-pity in the face of adversity. Brett Kavanaugh fails.